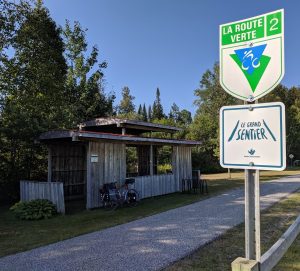 Quebec has a great collection of cycling routes, ranging from rail trails to well-marked roads and urban bike lanes.  A few years ago, I read about a loop ride from Montreal up into the Laurentian Mountains, down to Ottawa, and back to Montreal. This summer, I finally mapped it out, packed my gear, and hit the road for a solo adventure.  It was a great 8-day, 360-mile ride.

It’s easiest to think of this tour as a triangle:

There are lots of options:  camping or hotels/BnB’s, trails or roads, short days or long rides.  You can customize your agenda to suit your goals.  Hopefully my descriptions will help you plan an enjoyable ride.

Feel free to jump ahead to a specific segment:

This area is reasonably populous, with towns at regular intervals.  However, there are sections that get remote, with limited supplies.  It’s best to keep your bike well-stocked:

This loop includes at least 100 miles of gravel trails and dirt roads.  Some of them are sandy, rutted, or washboarded.

A carbon road bike with 23mm tires is not a good choice, especially since that wouldn’t be a very good rig for carrying gear.  I rode my Salsa Vaya touring bike with fenders, racks and 38mm tires.  It provided a good balance:  fast enough on the pavement but stable on most of the rough gravel patches.  There were some sandy sections where it slid around, and it definitely wasn’t the best choice for the mountain bike trails in Gatineau Park, but overall it was great.

Some means of carrying supplies is essential.  Any decent rear rack and a set of panniers should do the job.  If you’re camping, front racks and panniers will also be helpful.  You can read about my camping-touring setup at this recent post. 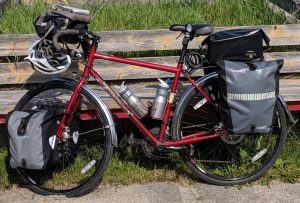 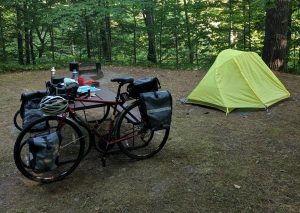 Much of this trail is rural and I always worry about being chased by dogs.  My helmet goes off to the people of Quebec.  Not a single off-leash dog charged at me on the entire route.  Of course, there are no guarantees your experience will be the same.  Keep your eyes open.

According to the McGill University (in Montreal), there are no poisonous snakes in Quebec.  That’s a relief.

There are no grizzly bears, either.  However, there are black bears, coyotes, wolves, raccoons, etc.  None of those typically pose any danger to humans, but it’s always a good idea to hang your food from a tree when camping.

Last, but certainly not least, is airborne pests.  There are mosquitos in varying intensity along the route, and the black flies along the Veloroute des Draveurs are ferocious.  Bring bug spray and keep it handy.

The primary language of Quebec is French.  However, because this region is fairly close to English-speaking Ontario and the urban center of Montreal, almost everyone is bilingual.  Some meant it when they said their English was limited, but I always replied (very honestly) that it was much better than my French.

Still, it’s always good to know a few phrases in the native language.  If nothing else, memorize:  “Bonjour.  Parlez-vous l’Anglais.”  (“Hello.  Do you speak English.”)  It will show some respect and get you off to a good start with the locals.

Check out this post for some tips on learning a new language for a tour.

Most of this route follows trails and roads that are designated for cycling as part of Quebec’s Route Verte network.  Information is available at the Official Website , though I find it frustratingly difficult to use, especially for identifying designated routes.  Many campsites, hotels, and BnB’s have committed to be bicycle friendly.  Look for the “Bienvenue Cyclistes” logo.  They are easier to find on the site.

It might be worth purchasing the Official Guide before embarking on this tour.  It costs $25 and is packed with practical information. 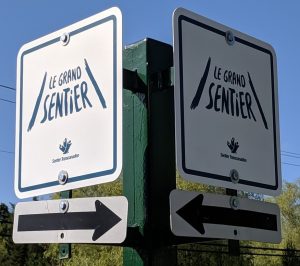 The first two legs (Saint-Jerome to Mont-Laurier to Ottowa) are also part of the The Great Trail (Le Grand Sentier) across Canada.  The signage is really great.  You can study the map for this trail at the Official Website.

Getting There and Parking

Since this is a loop, you can start/finish anywhere along the way.  I picked St. Jerome, about 30 miles northwest of Montreal.  It’s easy to get there since it’s right at the intersection of three major roads:  A-15, Rt. 117, and Rt. 158.  It’s close to the Montreal-Mirabel International Airport, too.

St. Jerome is the most common starting point for P’tit Train du Nord rail trail, so it’s got the welcome mat out for cyclists.  There is a parking lot (P9 – Place de la Gare) across the street from the new train station right next to the trail. At the northwest corner of the lot sits the old train station which has restrooms (great for changing) and a helpful tourist office that can provide maps, advice, and printouts of accommodations. 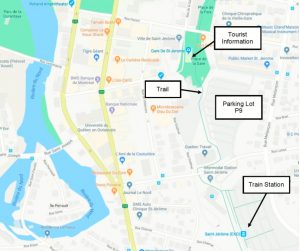 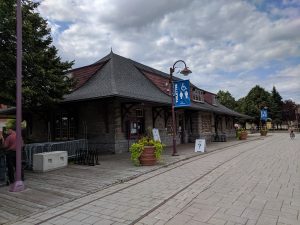 Parking at the lot is $6/day, BUT there is a limit of 7 days during the summer.  Most people will take longer than that to ride this loop.  The staff at the information office told me there might be 10 day passes available at the city parking office (10 Rue St-Joseph, 450-569-5000). 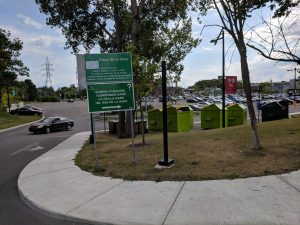 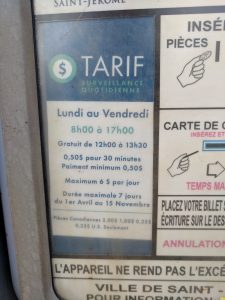 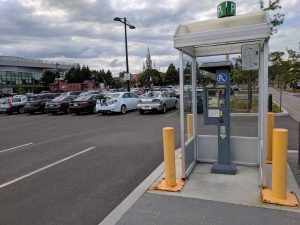 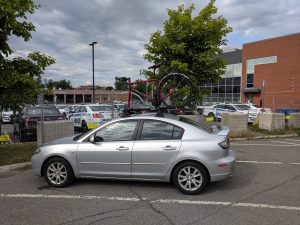 Rather than trying to chase down a longer pass, I decided to park on the street about a mile north, just off the trail, behind the police station (near the intersection of Rue Moreau and Rue Lachaine).  It was free and worked out fine.

Click here for a longer description of the P’tit Train du Nord section.

“P’tit Train du Nord” means “little train of the north” in English.  This entire leg follows an off-road trail built on a rail bed that was abandoned in the 1980’s.  It runs along a collection of rivers and lakes that keep the grades moderate and the scenery pleasant.  Most of the southern half is gravel.  About 8 miles around Mont-Tremblant and the entire upper half are paved.

This is one of the most popular trails in Quebec, with gently (but steady) climbs and lots of nice towns along the way.

It is also designated as part of Le Route Vert 2 and Le Grand Sentier. 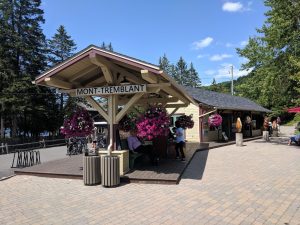 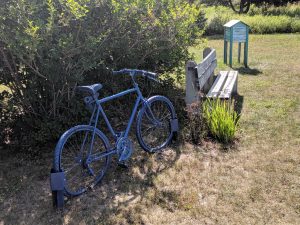 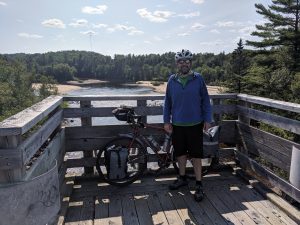 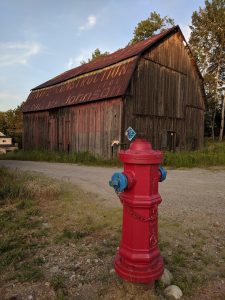 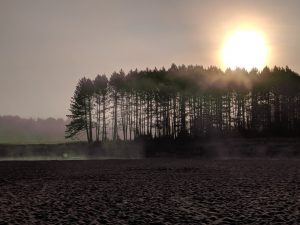 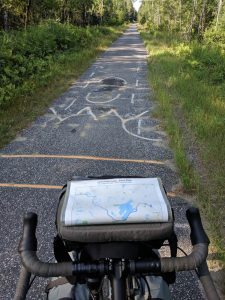 Click here for a longer description of the Gatineau Valley section.   (COMING SOON)

Ottawa, the beautiful capital of Canada, lies almost directly south of Mont-Laurier.  Between the two sits another rail trail called the VeloRoute des Draveurs.  (Dedicated to the log drivers who braved the waterways to transport timber south.)  It covers 72km/45mi of this leg.  The entire section is designated as part of Le Grand Sentier.

This route is not nearly as popular as the P’tit Train du Nord.  I barely saw any other cyclists in the northern half.  The towns are less touristy, and a bit more gritty, but still interesting enough to explore.

Ottawa is a real gem, well worth spending more than one night.  It’s got dramatic historic buildings, interesting neighborhoods, lots of museums, and an extensive cycling network.

Skip Gatineau Park unless you are an avid mountain biker or just absolutely want to camp there.  The trails are really too rough for a touring bike.  Instead, spend the night in Wakefield and head south toward Ottawa along the Chemin du Riviere.

To avoid the sandy, black-fly infested sections of the VeloRoute des Draveurs, ride on the shoulder of Rt. 105 from Kazabazua south. 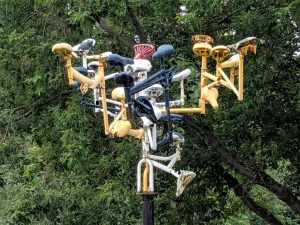 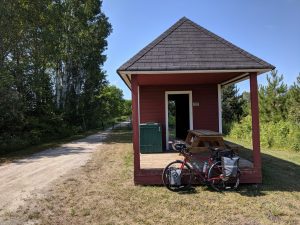 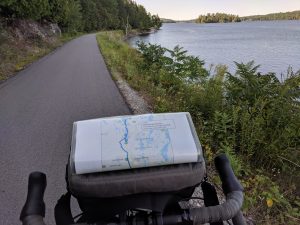 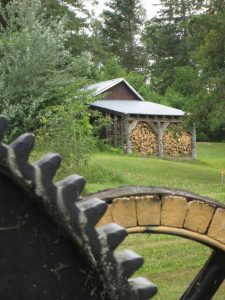 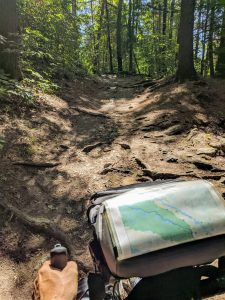 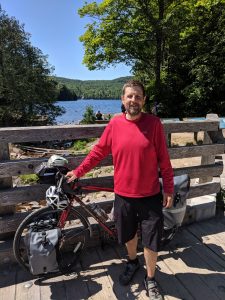 Click here for a longer description of the Ottawa Valley section.   (COMING SOON)

The final leg of this journey follows the northern shore of the Ottawa River from Gatineau to Lachute.  From there it follows the Riviere du Nord back to St. Jerome.

The section along the Ottawa River is designated as La Route Verte 1 and runs almost entirely on the shoulder of Rt. 148, which is wide and pleasant.

Most bike maps recommend a diversion into the Parc National de Plaisance, which costs 8.75$ to enter.  With thunderstorms closing in, I decided to stay on Rt. 148 and cover the miles more quickly.

Leaving the Ottawa River, after a short bit on Rt. 158, I jumped to the north bank the river just east of Lachute and followed Le Chemin de la Riviere du Nord for the final 20 miles (33 km).  What a beautiful road!  It was a great way to end the journey.

To avoid the roads along the Ottawa River, it’s possible to ride on the Prescott-Russell Recreational Trail, a rail trail on the Ontario (southern) side of the river that goes through several small towns along the way.  The distance is about the same, but my research indicates this trail is not well maintained and the scenery can be monotonous.  I recommend the route I took along the river on the Quebec side.

For a faster ride into Saint-Jerome, it is possible to skip the section on Le Chemin de la Riviere du Nord, which is winding and partly gravel, and ride the shoulder of Rt. 158 instead.  However, Rt. 158 is heavy with traffic and the gravel road is really enjoyable.  The few extra minutes on the Chemin de la Riviere are time well spent. 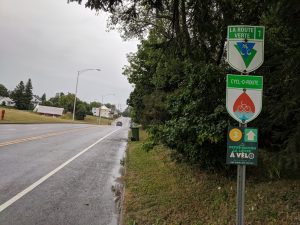 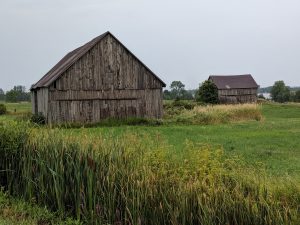 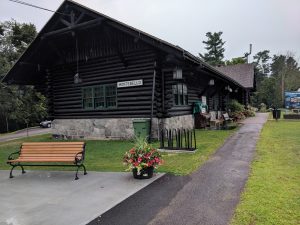 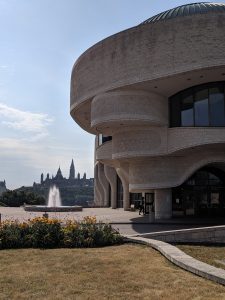 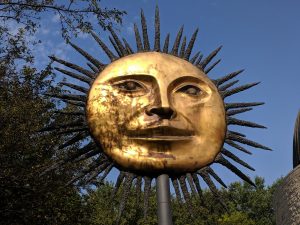 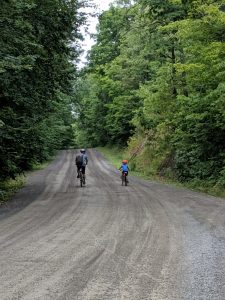 This is a really nice loop ride for a moderately experienced cyclist.  I would certainly ride it again, but would recommend a few changes to my route and itinerary: