I HAD A DREAM 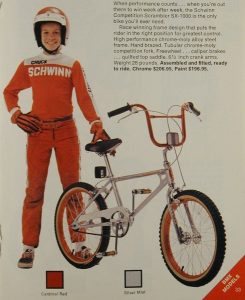 At 12 years old, I had pretty well worn out the bike I got for First Holy Communion, which was a classic 70’s cruiser with a banana seat and sissy bar.  By the late 70’s, that style was falling out of fashion anyway.  The cool new thing was BMX bikes, with mag wheels and bar/frame crash pads.

Even then, I liked to know all my options.  My mother, with remarkable patience, drove me to all the bike shops in the area to check out the Haro’s, Huffy’s, Mongooses, and Redlines.  But the one that caught my eye was a Schwinn Scrambler.  I remember it being described as Candyapple Red, but that doesn’t match the old ads I see now.  They only offered it in a few colors:  Spicy Chestnut, Frosty Silver, and Cardinal Red.  In any case, it was sweet.  Schwinn’s were special back then, like Surly’s and Salsa’s now.  The tag said $200, which was a lot of money in 1978.  I started saving. 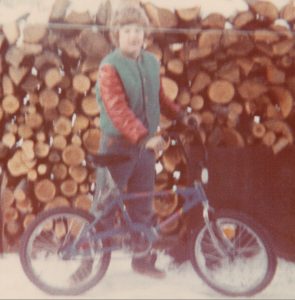 That year, I got my first newspaper route, waking up at 6:00 every morning to fold the papers, stuff them in a canvas bag and ride off into the nearby neighborhoods, steering my cruiser with ink-stained hands. It took a while at a few cents a paper (plus tips), but eventually my savings account reached $200 and we went to the bike shop.  Check out that photo of me showing it off in front of the wood pile.  Both my father and I remember it being a deep metallic red, which matches online photos of “Spicy Chestnut”.  But it looks more blue in this photo.  Is it my memory, or fading of the photo?  The colors sure look right on my favorite Miami Dolphins jacket.

In any case, the Scrambler was perfect for work and play.  I could strap my paper bag onto the tall handlebars without anything getting caught in the front wheel, and the knobby tires had good grip in the snow and ice of a northeast PA winter.  After school, it carried me all around the neighborhood and the abandoned strip mine we called “The Black Desert” in style.  Life was good.  I was the envy of the neighborhood.

We all like to think that the world was simpler back then.  Everyone left their doors unlocked, right?  But it really isn’t true.  There’s a reason “Thou shalt not steal.” was chiseled into the tablet when Moses came down from Mount Sinai.  Theft has been going on for a long time, and I knew it, so there was a lock attached to the metal railing on our back patio reserved for my beautiful Schwinn.  But we all get sloppy sometimes.  I probably came home for dinner, thinking I was going to go out and ride afterwards, so I didn’t need to lock it.  But I never went back out and the bike sat unlocked, bright and red like the apple the snake held out to Eve on that fateful day.  I came out in the morning to strap on my paper bag and it was gone.

I wasn’t naive.  Mine wasn’t the first bike to get stolen in Exeter, PA.  The town even had a registration program where you gave City Hall the serial number and they gave you a sticker to put on the bike warning would-be bandits that someone could identify them with their booty.  I had dutifully gone through all these steps and now had that serial number, written on a small scrap of paper, tucked into a corner of my wallet.  Everywhere I went, I scanned the landscape, looking for a glimpse of the BMX that some scoundrel had decided that I had scrimped and saved for THEM to ride.

Weeks went by without a sign of my missing machine, but one day, as I was walking across the train tracks around the corner from our house, I saw a younger kid riding alongside the rails on a bike that looked suspiciously familiar.  I stopped and let him get closer.  I pulled the paper out of my wallet, though it wasn’t really necessary because the number was already burned into my memory.  As our paths crossed, I stopped the kid, grabbed the bike, turned it upside down and confirmed the match.  He was scared, readily telling me his name and who he had borrowed the bike from.  They were both from a distant corner of the neighborhood.  I took the bike home and told the story to my parents.

Unfortunately, the bike was a shell of its former self.  The reflectors, chain guards, and accessories were gone, and patchy black paint from a spray can covered the beautiful metallic red factory finish and decals.  It felt like half was missing, but at least the Schwinn was back in my possession.

If you can believe it, the father of the kid who stole the Schwinn actually came to our house demanding that we give back his son’s bike!  My father, who isn’t always known for his restraint and diplomacy, actually managed, without throttling the man, to explain that we had registered the serial number at it matched the one on the bike his son had stolen.  Speechless, yet not apologetic, he backed out the door.

The next day, my father went to City Hall, seeking some punishment for this young miscreant, since the older miscreant who fathered him clearly wasn’t going to administer any discipline.  We had followed the rules and done our due diligence.  Now it was time for the wheels of justice to spin.  It seemed straightforward to me… shackles, flogging, compensation for the damage, prison time…it should have all been on the table.  But reality is often bracing.  The kid’s father had grown up in this town.  He was friendly with some of the cops and councilmen.  There would be no fines, no compensatory damages, no punishment at all.  I got the bike back and that was the most I could expect.

I went to school with this kid.  He was a year or two younger than me, so we weren’t in any classes together.  But I did see him in the wood shop from time to time.  I often thought about retribution, even developed some schemes.  It’s probably better that I didn’t do anything.  He wasn’t the sharpest knife in the drawer, and I’ve optimistically figured that life probably caught with him eventually.  But maybe it didn’t.  We’d like to think that what comes around goes around, but it doesn’t always work out that way.  Sometimes the ruthless and dishonest are the ones that get ahead.

When all of this happened, I remember feeling bad mainly for myself because I had done all the right things.  I worked hard, saved my money, and bought something practical that I could use for work and play and that would last a long time.  I had it registered with the town and knew the serial number.  I usually kept it locked, but after I slipped up, I was diligent, looking for it and carrying the serial number with me just in case.  And when I found it, I got the name of the kid who had it and the kid who stole it.  But in the end, none of it mattered.  I got a beat up shell of my formerly beautiful BMX, and the kid who did it suffered no consequences.

Decades later, I look at it differently.  Mostly, I feel bad for my father.  It must have been devastating for him.  What he wanted most was to protect his son.  He wanted to protect me from losing my bike, but also from losing my innocence.  In the way that parents want to extend their kids’ belief in Santa Claus, the Easter Bunny, and the Tooth Fairy, he didn’t want the illusion that the world is a safe and fair place suddenly laying shattered in shards at my feet.  But, of course, we all start learning those lessons a little at a time even as toddlers, and kids are lot less naive at twelve than most adults realize.

With four decades of hindsight, I think in the end it all worked out, in a way.  I’m a little more careful about protecting myself and realistic about how the world works.  Even so, I still try to live my life the right way, just like I did at twelve, and just like most people do.  I work hard and try to be productive, and I don’t steal or cheat or take advantage of other people just because I can get away with it.  Why?  At least in part because I don’t want to be the reason that someone else feels the way I did, or my father did, when he came back from the City Hall on that lousy day.  In the end, those aren’t bad lessons to have learned as a young man.

I’ve also figured out that BMX bikes are better for kids than adults.  You can get hurt on one of those things… 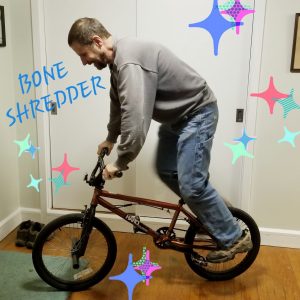