Trauma On The Trail 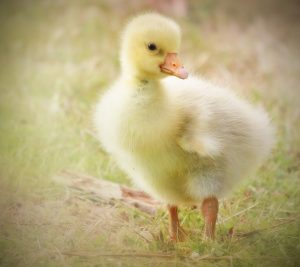 Along the trails where I ride around Philadelphia, there is a surprising amount of wildlife.  One evening last week, I saw groundhogs, big snapping turtles, and a racoon.  Then, nearing home on the canal trail in the neighborhood of Manayunk, I turned a corner to find a doe with a pair of fawns.  It feels good to know they’re there, doing OK, right on the outskirts of this big metropolis.

Spring, though, brings a whole new level of human-animal interaction.  Geese arrive in droves and stay near the water to begin raising their young.  There are ducks as well, but the geese really take control of the place.    They have few, if any, predators, especially in the parks along the trail.  There is some interest in reducing their numbers, but it seems unlikely, especially considering the legal protections afforded to the migratory members of the species. 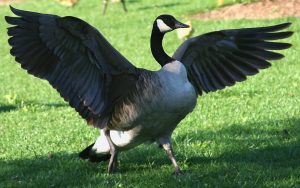 My relationship with geese bears some similarity to my checkered history with dogs.  I’ve been chased, terrorized and bitten by canines.  I try not to hold a grudge, but always approach them with a healthy dose of caution.  The incidents with geese have been fewer in number, but still worrisome.  Maybe it’s my demeanor.  Perhaps they can smell fear the way dogs do.  And Philadelphia geese have the kind of attitude that suits the city.  Out in the surrounding counties they look distrustful and keep their distance, but in the city they hold their ground with a stance that says “Wuchu lookin’ at?  Dis is my space.  You gotta problem wit dat?”  I’ve been charged more than once.  The most memorable was on the trail near the bridge in East Falls.  As I approached, he spread his wings, looking like a superhero with a cape hanging below his outstretched arms.  I half expected to see an emblem with a big “G” pasted across his chest.  Then he hissed and charged me.  If you’ve never been up close with an angry one, it’s easy to dismiss geese as docile birds, but they can get mean.  And they’re big and muscular, easily able to generate enough momentum to knock a cyclist off their bike.

Most of the geese in the Philadelphia area are resident, not migratory.  During the fall and winter, they scan from above, moving to wherever they find a fertile feeding area.  During the spring mating season, though, they stay on the ground, building nests and laying eggs.  Soon after the dogwood and cherry trees start to bloom, the goslings have hatched and are everywhere, with their parents hovering nearby.  They particularly like to feed on the trailside grass in the late afternoon.  By sunset, they retreat to the safety of the water.

In an unfortunate coincidence, we like to put recreational trails in the same places geese like to raise their young:  along the water’s edge in protected park land.  Going for a ride along Kelly Drive, the Manayunk Canal Trail, or the Delaware River Canal Trails in May and June presents a living obstacle course.

Adult geese are smart and alert.  They either move out of the way or hold their ground, looking you in the eye with a dare to proceed.  The goslings, on the other hand, are like kids on bicycles.  Just staying upright takes all their concentration and they haven’t had enough close calls to be aware of the surrounding dangers, so they veer back and forth across the trail unpredictably.

Like most cyclists, I always took the presence of the goslings lightly.  My goal was to keep moving while maintaining polite interactions with the other trail users.  Other cyclists get a bell ring and “On Your Left” when passing.  I stay clear of joggers and try not to pass at the same time anyone is coming by in the other direction.

For the feathered trail users, my “strategy” was to approach slowly, avoid angry-looking adults, and dart through when there was a decent opening.  It seemed to work for other cyclists and it worked for me for many years.

On a warm May evening a few years back, I set out from home and descended towards Manayunk on the Cynwyd Heritage Trail.  Over the bridge and at the bottom of the hill, I turned right (as usual) onto the Canal Trail.  It was one of those evenings when everyone wants to be out.  Cyclists pedaled, joggers strode, dogs on leashes dragged their owners along, and the geese spread out in fuzzy family units across the trail.

About 1/2 mile down, some locals were stopped for a gaggle, half admiring the cute youngsters and half waiting for an opening to get through.  A solo jogger was on the far side and a young couple was on my side as I approached.  It was a narrow section of trail, with a drop-off to the water on one side and a steep hill on the other.  If the geese didn’t want to be in the water, the only other choice was the trail.

I pulled up near the couple, stopped, and waited for an opening.  After about 30 seconds the group split, with the parents and most of the goslings on the water side to my left and a few straggler goslings on the hill side.  About half of the trail was clear, so I clicked my right foot into the pedal and accelerated towards the gap.  Just as my front wheel reached the hill side group, one of the goslings darted left across the trail between my wheels.

It was one of those situations you live in slow motion, like the highlight reel in a sports documentary.  I saw it all happening and knew immediately it would be bad, but once the pedals were turning forward there was no turning back.  There was no time or space to turn sideways, either.  When I finally came to a stop and spun around, there were four humans looking in horror and a gosling flailing on the trail looking like two feathery lumps with a tire track in the middle.  This young bird was clearly never getting up from that spot, let alone growing to scan the shores of the Schuylkill River from the sky above.

When the sheriff shoots a bad guy in a western, it’s dramatic and short.  The bad guy grabs his chest, utters a few words, closes his eyes, and perishes.  Real death isn’t so tidy.  Real death is usually accompanied by suffering and confusion, and it can drag on for a long time.

As I stood straddling my bike, the mother goose came over and urged her youngster to get up and out of the middle of the trail.  The gosling looked at her and struggled to comply, but none of the limbs and motions that it had been learning to master over the past few weeks worked anymore.  Neither of them seemed to fully comprehend the gravity of the situation.  Though it would have amplified the unpleasantness in the short term, I decided the best thing I could do was go over and put the poor thing out of its misery.  But the mother was large, understandably agitated, and unwilling to let me anywhere near her child.

None of the bystanders had any better ideas.  After a few minutes, the only plausible option I could see was to let nature take its course.  I slowly pushed on the pedals, feeling immensely guilty and nauseous, and headed down the trail.  After a few hundred yards, I remembered that this was an out-and-back ride.  I was still on the “out” leg.  The continuation of the scene awaited me on the way “back”.  Unable to bear that possibility, I decided on an alternate return route on the hilly roads above the trail.

Through the rest of the ride, I contemplated how I could return and end the suffering.  I couldn’t envision a way to do it alone and asking a stranger on the trail to help me seemed an unfair imposition.  I know that wildlife perish in awful ways all the time, but this incident was my doing and there was no easy way out.

The next day, I returned to the trail, afraid of what I might see.  But there was no sign of the horrific scene from the previous night.  Perhaps the mother dragged the gosling out of the trail.  Maybe some passersby had more courage and fortitude than I did.  Or maybe a predator or scavenger cleaned up the ugly mess before the sun rose.  I still wonder every time I pass that section of the trail.

It’s been said that the best way to deal with a difficult experience is to talk about it.  If you lay it all out there, it’s easier to come to terms with what happened.  You don’t forget it or stop wishing it hadn’t happened, but you accept it and move on.

Shortly after “the incident”, I confided in a few friends who did what you would expect.  They listened with horrified expressions then hatched a plan to make light of the situation.  They conspired to make little trail signs, at goose-eye-level, that would that warn other gaggles of the evil two-wheeled menace in their midst.  The signs would be scattered among the appropriate section of trail and include an actual photo of the perpetrator.

Thankfully, my friends are better at elocution than execution, so the plan remained little more than an imagined scheme.  However, I appreciated the image of me as the guilty party, being exposed to the community I had wronged.  It was irrational punishment suited to my irrational guilt for an unintended crime.

Over the course of our years, we are all either directly or indirectly responsible for the death of other beings.  It’s virtually impossible to live our human existence without ending other lives.  Usually someone else does the dirty work for our benefit and the victims are deemed insignificant.  It’s an odd thing as humans.  We kill other things with little regard, but then wait around anxiously wondering whether we will die from old age or disease or an accident, not even realizing the luxury of our own situation

But killing another being one-on-one somehow feels different, even if the end result is the same.  I clearly remember some of the other beings that have perished at my hands.  Some were intentional, like the fish and deer I pursued as a teenage “sportsman”, or the rat twitching in a basement trap.  Others were more incidental, like a squirrel under a car tire…or the gosling.  As the years go by, I find myself trying harder and harder avoid these incidents – to actually “live and let live”.

Now each year as the spring approaches, I tune up my bikes and wait for the warm sunny afternoons.  When they arrive, I head for the trails that are further away from the water and the breeding birds.  Of course, that’s not entirely possible in my region.  When I do come up on unruly gaggle, I stop and wait a little longer, giving them a little more time to clear a bigger path.  When they do, I pass through slowly, watching for ambling youngsters.  And I wince when other cyclists dart through quickly, not considering what could possible go wrong.

When the summer arrives, I breath a sigh of relief as the goslings grow into geese and abandon the trail for the safer skies above.

Be careful out there.